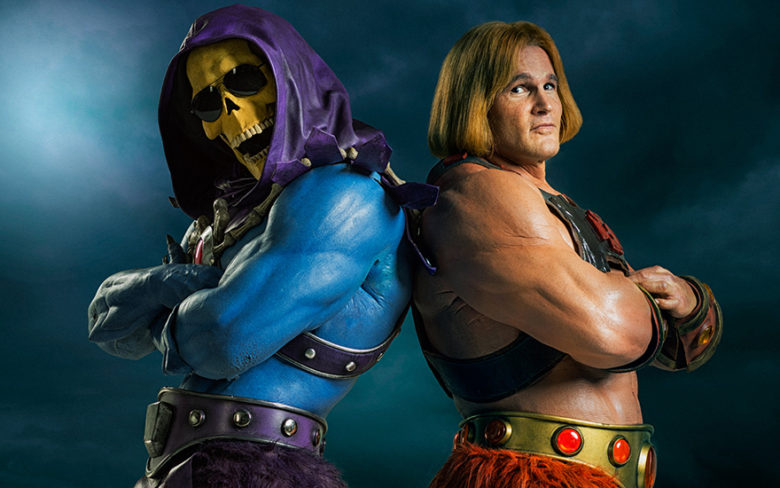 Origins of He-Man Masters of the Universe

The He-Man action-figure was initially released in 1982, the series features the lead character, Prince Adam of Eternia; together with his companions (Battle Cat, The Sorceress, Teela, Man-At-Arms etc.) He-Man wields the Sword of Power to defend Eternia from the evil forces of Skeletor. For Skeletor will stop at nothing to conquer the Mysterious Fortress of Castle Grayskull.

The backstory for this media franchise was developed by Filmation animation studio in partnership with Mattel; this was no light undertaken, the businesses were so invested in this product On December 1st 1982, Michael Halperin wrote a “series bible”. No. Seriously a whole “Bible”, you can find it here. Shortly after debuting the first release of He-Man action figures, both companies pitched the idea to ABC network; they turned it down.

Eventually the series was aired through Barter Syndication (popular due to it’s flexibility – a station can pick up a series barter syndicated program for a few weeks – this is in contrast to the long term financial commitment of a traditional syndicated show): on September 5th 1983. He-Man became the first syndicated series to be based on a toy franchise; by 1984 the show was being aired on 120 US stations and in over 30 countries worldwide.

Minds Behind the Melodies

Shuki Levy and Haim Saban are the geniuses behind the series’ music.

Shuki Levy is an Israeli born in Mandatory Palestine in 1947. He began his career as a singer and music performer in various bars and clubs around Tel Aviv. He later moved to Paris, France where he took to the stage and joined in many theatre productions – including the musical, ‘Hair’. While living in France he met future business partner and lifelong friend Haim Saban. The idea was that Saban would handle the business deals and Levy would curate the music.

Both a musician and businessman Saban, born October 1944, is an Israeli-American investor, media proprietor, philanthropist, record, film and television producer. In 1980 Levy and Saban founded a global independent American-Israeli television production company known as Saban Productions. Initially the company was known for dubbing, importing and adapting numerous Japanese TV series; in 1988 the company rebranded under the name Saban Entertaiment; their newly established firm then went on to partnership with Marvel Entertainment Group, in 1996, to form Fox Kids Worldwide.

Why Does the Jingle Work?

The He-Man universe is in a medieval setting, so the ominous drums and the echoed chanting make for a very spooky, yet fitting, introduction to the He-Man’s world. The jingle utilises a mixolydian mode in C, it is a diatonic scale modern musical mode; a common scale used as one of the medieval church modes.

What do you love about the He-Man theme song? Listen here and let us know in the comments below! Happy Jingling!

« Green Toys Inc. – A Sustainable Toy Story
THE POWER OF MUSIC AS A DEVICE TO CONVEY A MESSAGE »