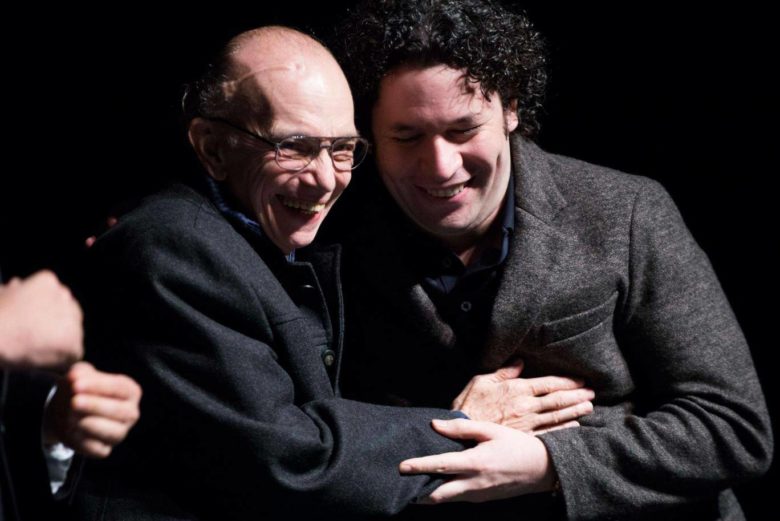 Music: A Tool to Fight Hardship

Here at Silent Media, we believe in the power of music and the innate strength it possesses to heal and induce deep emotion – felt by both the audience and musician alike – through experience or expression.

The Jose Marti Bolivarian School is one such school that also understands the power of music. In the distance a faint bad-ump, bad-ump, bad-umping gradually reveals itself; children haul packages the size of overgrown lunchboxes through the corridors.

The heavy sun beats down and the thickly tropical courtyard is plastered with students, as they practice instruments of all distinction. Founded in the barrio of Sarria in Caracas, Venezuela, this School is located right in the heart of turmoil and strife. Caracas is home to the worst crime rate in South America.

As described by the school’s director of music, Rafael Elster, “There’s a lot of gang fighting – but the police are as bad, if not worse. They come in shooting. Last time, they shot a couple of kids…” he blankly states. It is evident life in Caracas has taken a toll on its youth and adult counterparts alike. But alas, the Jose Marti Bolivarian School is one of many schools throughout Venezuela to be a part of a radical social reform project; better known as ‘El Sistema’. The project provides opportunity to children often living in absurd circumstances; the kids are afforded a chance to extinguish the poverty cycle in their lives; with the help of skills earned through music.

Established in 1975 by musician, activist and educator José Antonio Abreu; El Sistema was founded in a garage with Abreu and nine other musicians. From these humble beginnings the network expanded to 300 orchestras and choirs across Venezuela and the globe; reaching a total of 700,000 (as of 2015) youths. El Sistema is a publicly financed community sector music education programme. The project was formed to “provide free classical music education that promotes human opportunity and development for impoverished children,” in which Abreu describes as “primarily a social inclusion project – very fast and effective social inclusion. It’s not just about personal happiness, but about learning social skills to hold a profession with dignity.”

The Power of Music

The need for social reform was birthed from an observation, by Abreu, that Venezuela had no orchestra comprised of Venezuelan musicians; but in contrast, there were ensembles composed mainly of Europeans. At the time, music and art education were exclusive to families who could afford to buy instruments for their youngsters. Abreu’s ideal is of a country in which art education is within the reach of every resident. So finally, one no longer must talk about art being the property of the elite; but the heritage of the people. Abreu coaxed and manoeuvred until finally he was able to hold the first concert of Venezuela’s new youth orchestra; on April 30th 1975.

In Venezuela, the original program provides 4 hours of formal musical training and rehearsals per weekday after school, as well as rehearsals on weekends also.

Abreu’s vision has created a timeless revolution that will continue to transform young lives in Venezuela, and beyond. This is one of many examples of the ability of music to provide solution and cause radical reform, in both society and individuals.

Here you can find José Abreu briefly discussing his ideals.